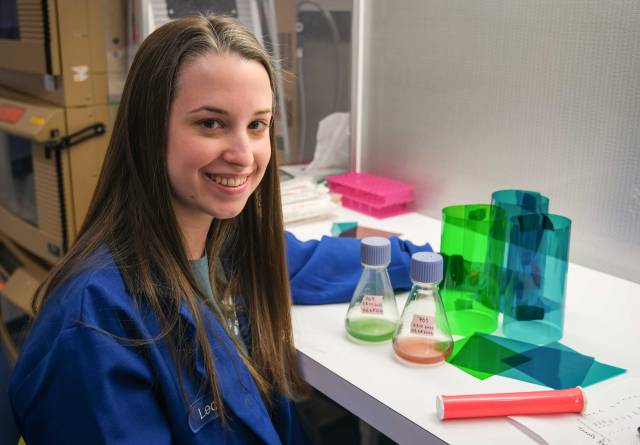 But what happens with the sequences not selected by nature? And what possibilities lie in constructing entirely new sequences to make novel, or de novo, proteins bearing little resemblance to anything in nature?

That’s the terrain where Michael Hecht, professor of chemistry, works with his research group. And recently, their curiosity for designing their own sequences paid off.

Their work opens the door to making nanomaterials in a more sustainable way by demonstrating that protein sequences not derived from nature can be used to synthesize functional materials — with pronounced benefits to the environment.

Quantum dots are normally made in industrial settings with high temperatures and toxic, expensive solvents — a process that is neither economical nor environmentally friendly. But Hecht and his research group pulled off the process in the lab using water as a solvent, making a stable end-product at room temperature.

“We’re interested in making life molecules, proteins, that did not arise in life,” said Hecht, who led the research with Greg Scholes, the William S. Tod Professor of Chemistry and chair of the department. “In some ways we’re asking, are there alternatives to life as we know it? All life on earth arose from common ancestry. But if we make lifelike molecules that did not arise from common ancestry, can they do cool stuff?

The team’s process can also tune nanoparticle size, which determines the color quantum dots glow, or fluoresce, in. That holds possibilities for tagging molecules within a biological system, like staining cancer cells in vivo.

“Quantum dots have very interesting optical properties due to their sizes,” said Yueyu Yao, co-author on the paper and a fifth-year graduate student in Hecht’s lab. “They’re very good at absorbing light and converting it to chemical energy — that makes them useful for being made into solar panels or any sort of photo sensor.

“But on the other hand, they’re also very good at emitting light at a certain desired wavelength, which makes them suitable for making LED screens.”

And because they’re small — composed of only about 100 atoms and maybe 2 nanometers across — they’re able to penetrate some biological barriers, making their utility in medicines and biological imaging especially promising.